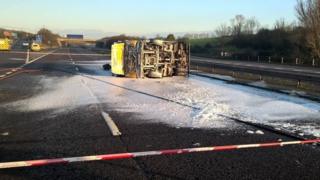 A tanker carrying kerosene overturned on the M5 in Somerset, spilling its load and shutting the road.

The top of the tanker split when it overturned and 1,000 litres of oil spilt on to the carriageway, Avon and Somerset Police said.

The motorway is closed in both directions between junction 23 Bridgwater and junction 24 Huntworth.

Police said fuel will need to be removed from the tanker before it can be recovered.