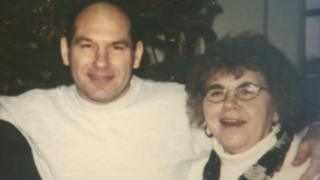 Jack Whomes and his mother Pam, who is fighting for his release from prison

The mother of a gangland murderer has said she will fight until her dying day for his release, 20 years after he killed three men.

Drug dealers Craig Rolfe, Tony Tucker and Pat Tate were shot dead in a Range Rover in Rettendon on 6 December 1995.

Jack Whomes and Michael Steele were jailed for life for their murders. Pam Whomes said she hopes she is “still alive to see him walk out of prison”.

A retired detective said he had “no doubts whatsoever” about the case.

It became known as the “Essex Boys” murders, particularly after a 2000 film of the same name, starring Sean Bean.

The three murdered men, all career criminals, were …read more

Dusty the kitten gets stuck in bin