Shia LaBeouf remained tight-lipped as he completed the ‘metamarathon’

Hollywood actor Shia LaBeouf has run 144 laps around a museum in Amsterdam in what has been described as a conceptual art performance.

The 28-year-old completed the feat dressed in purple leggings and a green vest and said nothing to reporters while he completed his run.

LaBeouf ran his “marathon” around the Stedelijk while a 12-hour artistic conference took place inside.

The actor has hit the headlines for a number of outlandish stunts recently.

Earlier this year, he took part in a conceptual art performance as he sat in a room wearing a paper bag over his head while visitors were invited to enter.

He also appeared on the red carpet at the Berlin premiere of Nymphomaniac, also wearing a bag over his head displaying the message “I am not famous anymore”.

The actor appeared in court in June, admitting disrupting a performance of the musical cabaret on Broadway. 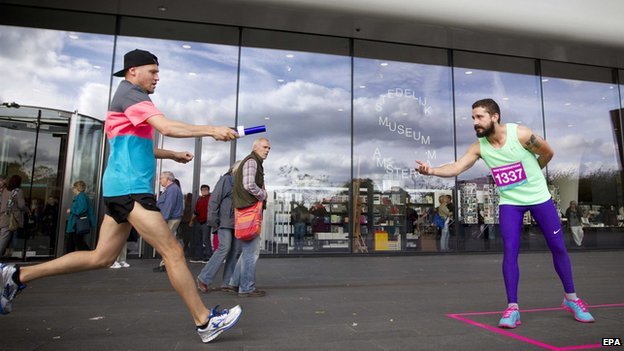 Hendrik Folkerts, public programme curator at the Stedelijk Museum, said the run – undertaken by LaBeouf and two other performance artists – was staged to mirror the long debate taking place inside the building.

Some 600 artists and philosophers gathered to consider how the world is perceived by the social media-savvy generation born in the 1980s.

“As we are having a ‘marathon’ conference inside the Stedelijk, we also wanted a reflection of that outside. Nobody can do it better than Shia and the other artists at this performance,” said Mr Folkerts.

LaBeouf, whose film credits include Wall Street: Money Never Sleeps and playing Sam Witwicky in the Transformers movies, will next be seen on screen opposite Brad Pitt in World War Two drama Fury.

VIDEO: The Stones roll into Cuba for landmark...