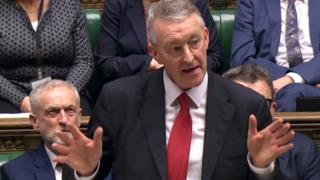 Labour says its leader Jeremy Corbyn has “taken soundings” about a possible shake-up of his shadow cabinet.

It comes amid speculation that he was thinking of moving colleagues who disagreed with him in key areas.

The BBC’s political editor Laura Kuenssberg said no final decisions had been taken but it seemed more likely than not Mr Benn would keep his job.

Our correspondent said she expected the new shadow cabinet line-up to be announced at some point on Tuesday, after days of speculation about far-reaching changes – although it could be incomplete and less dramatic.