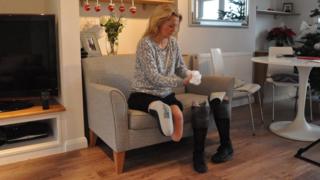 Tracey Ralph had her legs amputated below the knees and lost most of all her fingers, but not her thumbs

A woman who came so close to death that doctors told her relatives to say their final goodbyes is due to celebrate Christmas with her family one year on.

Tracy Ralph believed she had a cold last year but was “too busy to rest” with two young sons.

She powered through with painkillers but deteriorated and on Christmas Day was put in an induced coma. She was diagnosed with blood poisoning.

The 35-year-old, of Hockley, Essex, said she was thankful to be alive.

Mrs Ralph said septicaemia could have claimed her life were it not for a quick-thinking nurse who called an ambulance.

She was due to take her …read more

UK medical student 'recruiter for IS'

Female knights to joust at English castles for...