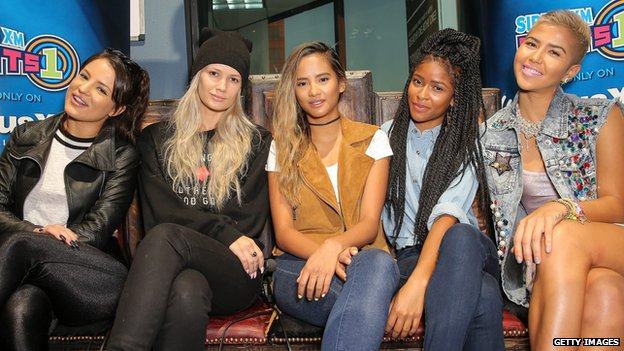 G.R.L., with Simone Battle pictured second right, were originally put together to be the new Pussycat Dolls

Pop group G.R.L. have gone to number 11 in the UK single chart, two days after one of their members was found dead.

Simone Battle, 25, who joined the group after being a finalist on The X Factor USA in 2011, was found dead at her home in Los Angeles on Friday.

Her death comes as their full debut single Ugly Heart is beginning to take off around the world.

Their only previous UK chart appearance was as guest performers on Pitbull’s number six hit Wild Wild Love in May.

The four remaining members of the group said in a statement that “words cannot express the depth of our loss” and “we will carry her memory with us in everything we do”.

G.R.L. were put together by Pussycat Dolls creator Robin Antin and were originally intended to be a new version of the Pussycat Dolls after that group split up.

Elsewhere on this week’s UK chart, French-Israeli duo Lilly Wood and German producer Robin Schulz remained at number one for a second week with Prayer In C, according to the Official Charts Company.

The rest of the top five comprised Won’t Look Back by Duke Dumont, Superheroes by The Script, Black Widow by Iggy Azalea featuring Rita Ora, and Sam Smith’s I’m Not the Only One.

On the album chart, Smith regained the number one spot with In the Lonely Hour, pushing last week’s chart-toppers Royal Blood into second place.

Liverpool to reimagine The Beatles' Sgt Pepper in...