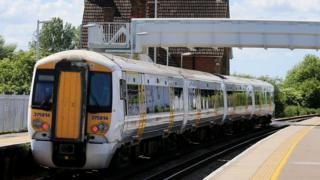 Overcrowding, poor value for money and dirty trains were among the issues raised

Rail passengers in the south east of England are the least satisfied in the UK, according to a survey.

Southeastern was the joint worst performing operator alongside Thameslink & Great Northern, with an overall satisfaction score of just 46%.

Overcrowding, poor value for money and dirty trains were among issues raised by the poll of 6,986 travellers, the survey by consumer group Which? showed.

Grand Central, which operates on the East Coast Main Line, was top with 79%.

It achieved five stars for availability of seating, punctuality, cleanliness of trains, reliability and value for money.

Hull Trains was second with a customer score of 73%.

Faring just better than the worst performers was Abellio Greater Anglia, with a 47% score, followed by Southern (48%) and Arriva Trains Wales (49%).

Which? also found a third of commuters polled experienced delays on their most recent journey, with the worst commuter services for delays operated by Arriva Trains Wales, Thameslink and Great Northern, First Great Western/Great Western Trains and Southern.