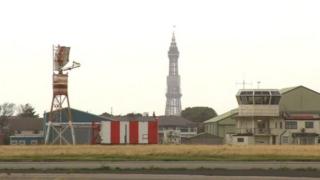 Light aircraft from Isle of Man missing off Blackpool

The plane was due to land at Blackpool Airport at 09:15 GMT, police said

Contact has been lost with a light aircraft off the coast of Lancashire, police have said.

The aircraft was travelling from the Isle of Man to Blackpool Airport with one person on board when contact was lost and it disappeared from the radar three miles out at sea.

A coastguard spokesman said there is a “strong likelihood that this aircraft may have ditched into the sea”.

The plane was due to land at Blackpool Airport at 09:15 GMT, police said.

A search is under way involving Lancashire Police, along with Blackpool Coastguard and Morecambe Bay lifeboats.

A spokesman for Lancashire Fire and Rescue Service said a search of the shoreline has been completed.

Didcot men 'could have been rescued'