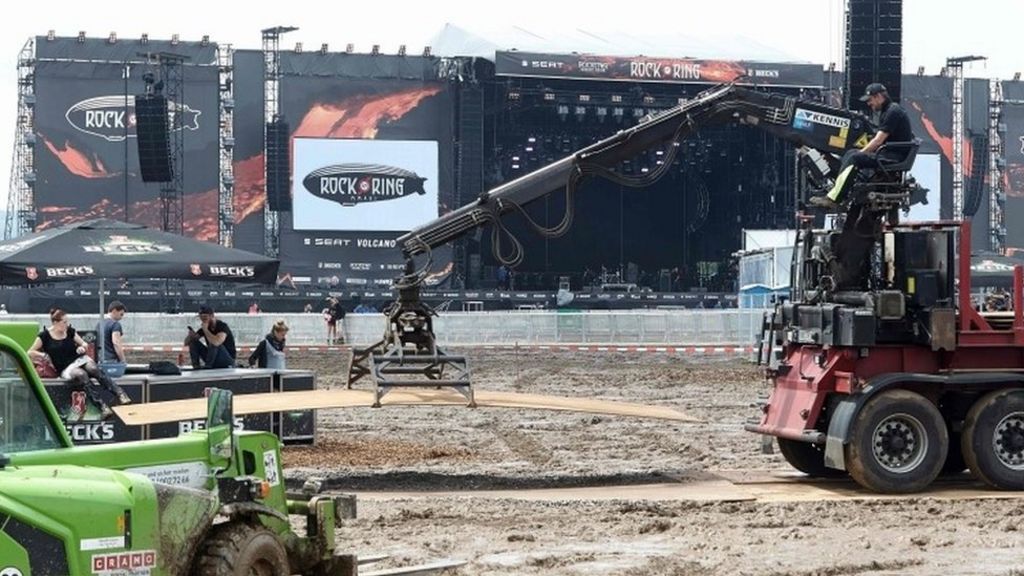 The third and final day of the sell-out Rock am Ring music festival in Germany has been cancelled after lightning hurt at least 80 fans, organisers say.

They say the decision was taken after more bad weather was forecast.

Performances were suspended on Saturday during continued thunderstorms, forcing many of the 92,000 fans at the open-air event to shelter in cars and tents.

Organisers were forced to cancel it after local authorities revoked its licence early on Sunday morning.

They said on Facebook (in German) that they regretted the decision but accepted it was necessary because the safety of fans was of paramount importance.

Critics on Facebook have accused organisers of not cancelling the event quickly enough.

Fans at Rock am Ring – held at the airport in the town of Mendig, about 100km (62 miles) west of Frankfurt – were told to clear the festival grounds by noon on Sunday.

At least eight people were seriously injured by the lightning strike early on Saturday morning.

Central Europe has been hit by severe storms and rain over the past few weeks, leading to 11 deaths in Germany.

The Rock am Ring festival – one of the most popular of its kind in Germany – also suffered lightning strikes last year, when 33 people were taken to hospital.

The festival website has repeatedly warned fans of the possibility of strong rainfall and thunderstorms.

The organisers of Rock am Ring, now in its 31st year, initially said on Saturday that this year’s event would continue. It was due to have finished on Sunday evening.

Red Hot Chili Peppers were among several bands, including Black Sabbath, Foals, Deftones and We Are Scientists, who were on the line-up.

Adele and Radiohead up for indie awards