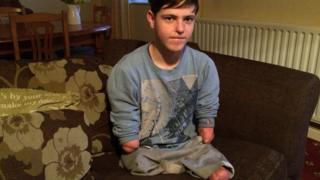 The family of a teenager who lost his arms and legs from meningitis were shocked when told he had to prove he still needed a disability payment.

Edward Bright, from Ripley, Derbyshire, lost his limbs when he was seven and needs help with much of his life.

When he turned 16 and reapplied for a benefit he was told he had to attend a meeting to be assessed.

The Department for Work and Pensions has now said a face-to-face meeting is not necessary.

Edward Bright as a young boy in hospital with meningitis

Corbyn to defend leadership of party