Lindsay Lohan has made her stage debut in the West End, although her performance did not go entirely smoothly.

The Hollywood actress forgot her lines once during the second act of Speed-the-Plow and was helped by a prompt.

She plays the role of secretary Karen in David Mamet’s Hollywood satire, a role that was originated by Madonna on Broadway in 1988.

But one prominent critic described the Lohan as being “out of her league”.

During the curtain call, Lohan let off a giant party popper that showered the front of the stalls with gold confetti.

The 28-year-old appears alongside West Wing star Richard Schiff and stage actor Nigel Lindsay who play Hollywood hotshots – Bobby Gould and Charlie Fox – who want to pitch a movie idea to the head of the film studio.

Their plan goes awry when Karen suggests a different idea for a film based on a book she was asked to read. 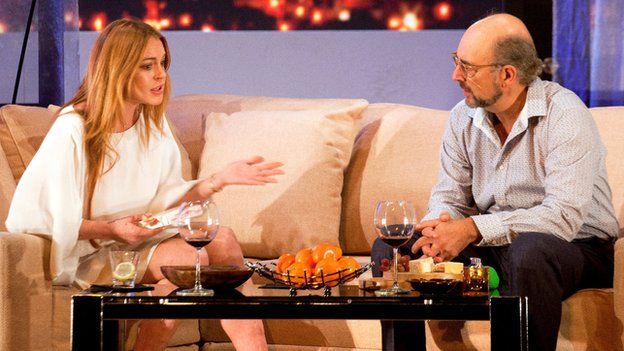 Thursday’s opening night at the Playhouse Theatre followed a week of previews and newspaper speculation about Lohan’s performance.

The actress developed a reputation for being unreliable after her early career as a child star descended into alcohol abuse and a series of arrests,

Lohan, who made her name in films such as The Parent Trap, Freaky Friday and Mean Girls, told the BBC in July she felt “very lucky and excited and nervous” to be making her stage debut in the UK and did not intend to miss any of her London …read more

Harrison Ford 'in near-miss' at US airport