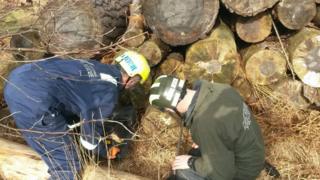 From the section Hampshire & Isle of Wight

Firemen and animal rescue specialists teamed up to free Bernie

An inquisitive dog had to be rescued with the help of a tractor after it got stuck underneath a large stack of logs.

But with the assistance of the Forestry Commission’s tractor, seven-year-old Bernie was eventually freed unharmed and returned to his owner.

Firefighters who attended the scene, near Beaulieu, on Thursday afternoon …read more