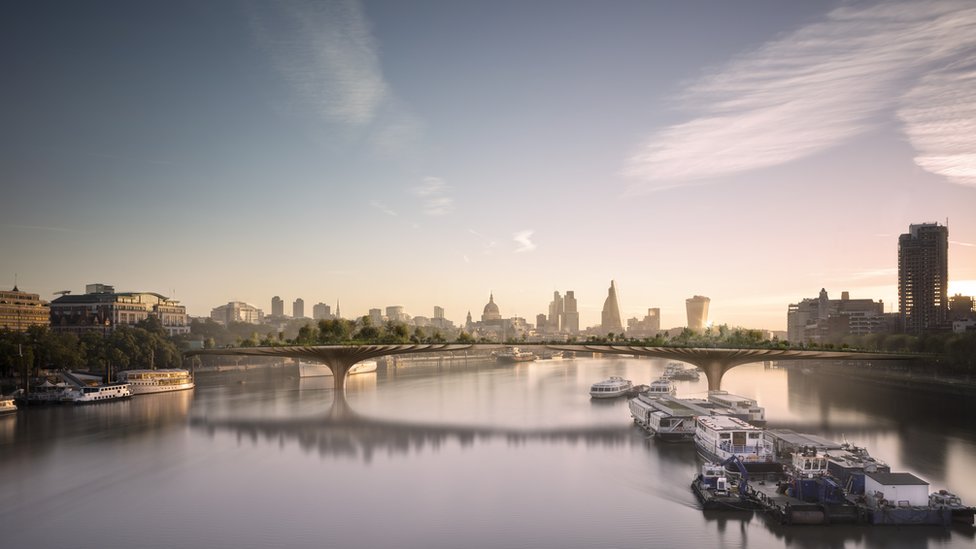 A plan to build a bridge covered with trees and shrubs across the River Thames has lost the essential support of the mayor of London.

Sadiq Khan has written to the Garden Bridge Trust saying he cannot provide the maintenance guarantee needed for planning permission to be granted.

The letter follows a meeting between the Garden Bridge Trust and City Hall.

A review of the project said £37.4m had been spent and it would cost taxpayers £46.4m even if it was cancelled.

Dame Margaret Hodge, who carried out the review into whether the Garden Bridge offered taxpayers value for money, said the project should be scrapped.

Initially £60m of public money was pledged on planning for the bridge.

Transport for London (TfL) pledged £30m, but £20m of that was to be a loan, and the rest was from central government.

In his letter the mayor said: “The conclusion I have reached is that Dame Margaret was right to conclude that the project progressing would expose the London taxpayer to additional financial risk, both with regard to the bridge’s construction and its maintenance.

“I have been clear that this should not be allowed to happen. Accordingly, the GLA (Greater London Authority) is unable to provide Mayoral guarantees for this project.

“I regret that the significant expenditure of public funds and effort from both public bodies and the Garden Bridge Trust has not led to a situation where I can provide the guarantees requested.”

Mr Khan said the pledged funds the trust had detailed at the meeting on 20 April were lower than two years earlier “suggesting support for the project is not robust enough to generate the required funds.”

Less than half the required private funds had so far been raised, he said.

In January, the trust admitted its future was in doubt after publishing accounts, which showed a £70m shortfall in funding.

Dame Margaret’s review criticised many of the decisions taken regarding the Garden Bridge saying they were driven more by electoral cycles than value for taxpayers’ money.

Her review also found costs had risen from an early estimate of £60m to more £200m now.

The trust accused Dame Margaret of ignoring information in her review.

Trust chairman Lord Davies said it had been one-sided and full of errors.

At the time he said he remained focused on the bridge’s future, which was in the hands of the London mayor.