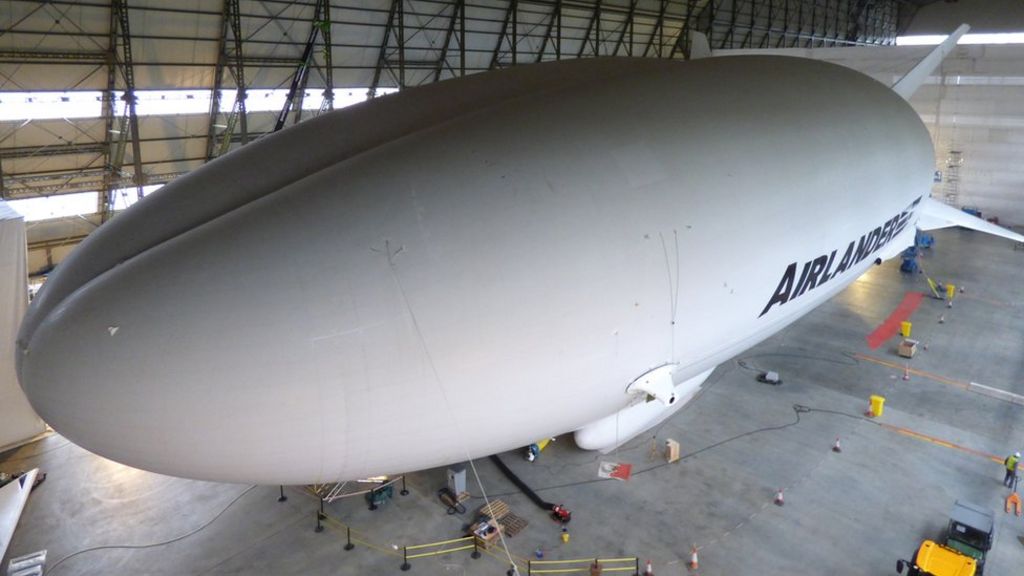 New photographs of the world’s longest aircraft have been released, before it is unveiled for the first time.

A British firm has spent the last nine years developing the prototype in the UK’s biggest aircraft hangar, Cardington in Bedfordshire.

It will be floated inside the hangar for the first time since its completion on Monday.

The airship, which cost £25m to build, can stay in the same spot for three weeks and can even fly with bullet holes in it.

The US Army ran out of money to develop it as a surveillance machine, so the British aerospace company behind it bought the rights back.

Hybrid Air Vehicles (HAV) believes the vessel, which is silent and emits no pollution, could be the future for air travel.

The aircraft needs 1.3m cubic feet of helium – enough to fill 15 Olympic-sized swimming pools – to get off the ground.

It can take off vertically and land on almost any surface, including ice, desert and water.

The firm is hoping to build 12 Airlanders a year by 2018, some as passenger aircraft that will carry up to 48 people at a time.

Chris Daniels, Head of Partnerships at HAV, said: “We will not compete with a 747 flying across the Atlantic, but we can offer the ultimate flight experience for tourism and leisure purposes.

“It’s perfect for sightseeing because we can have floor to ceiling clear panels, and we can open the windows because we are not flying as high or as fast as traditional planes, but we will not be offering a service to get from A to B as quickly as possible.”