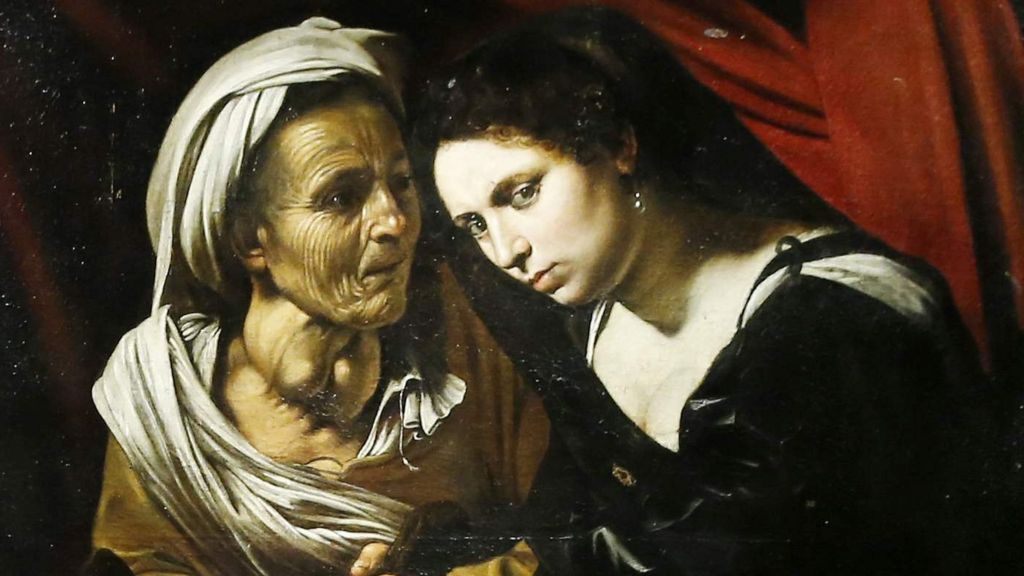 Warning: The paintings featured below depict a graphic image

A painting that may be by the Italian master Caravaggio and worth £94m ($135m) has been found in the loft of a house in southern France.

It was found in Toulouse two years ago and passed to art expert Eric Turquin, who says it is a version of the 1599 work, Judith Beheading Holofernes.

He said it was discovered by the owners when they investigated a roof leak.

The French government has placed a bar on the work leaving the country for 30 months while tests are carried out.

The work, which depicts the Biblical heroine Judith beheading an Assyrian general, is thought to have gone missing about 100 years after it was painted.

Another version of it, which was also thought to be lost before its rediscovery in 1950, hangs in Rome’s National Gallery of Ancient Art.

Experts at Paris’ Louvre Museum are examining the work to try and establish its creator, though Turquin said there would “never be a consensus” on who painted it.

If it proves to be genuine, the French Government will be given the first chance to purchase the work.

CaravaggioCaravaggio – whose real name was Michelangelo Merisi – was born in 1571 or 1573 and had a violent and chaotic life, dying in mysterious circumstances at the age of 38.
He pioneered the Baroque painting technique known as chiaroscuro, in which light and shadow are sharply contrasted.
He was famed for starting brawls, often ended up in jail, and even killed a man.
He was allegedly on his way to Rome to seek a pardon when he died, having spent the last few years of his life fleeing justice in southern Italy.

What’s wrong with the BBC? This entry passed through the Full-Text RSS service – if this is your content and you’re reading it on someone …read more