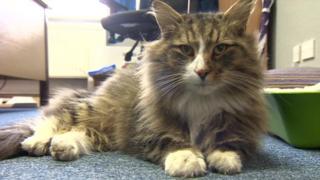 A cat missing for more than a year has been reunited with his owner after he was found “feasting” in a pet food warehouse.

Norwegian Forest cat Clive vanished from his home in Toton, Nottinghamshire, in October 2014.

He was found at the Kennelgate Pet Superstores warehouse, about two miles away, where he had repeatedly set off the alarms during the night.

His owner Tanya Irons said she could not believe he was “so porky”.

Scrapping IS play 'shuts down' debate