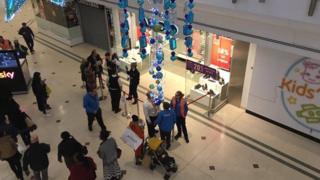 A machete has been recovered after a suspected knife fight broke out at a shopping centre on Boxing Day.

Officers were called to reports of an altercation at the Intu Bromley Shopping Centre at 15:45 GMT.

Video filmed by a member of the public appears to show shoppers fleeing in panic, while a photo shows a police officer holding what appears to be a large knife.

A man in his 20s, who suffered a minor head injury, was arrested.

He was detained on suspicion of affray and possession of an offensive weapon.

Footage posted on Twitter by Alexander Adeosun, who was shopping with his friends at the time, shows people running through the shopping centre.

“There was panic and people were running and falling over,” he said.

Baby shot in head with air rifle in...