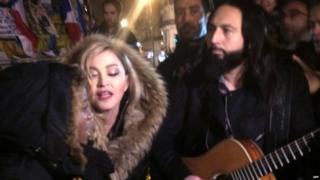 Madonna has given an impromptu performance in Paris in tribute to the victims of the 13 November attacks.

After her Bercy arena concert on Wednesday, she tweeted she was heading to the Place de la Republique, which has become a shrine to those who died.

Madonna, who is in the city for her Rebel Heart tour, was filmed singing along with her 10-year-old son David.