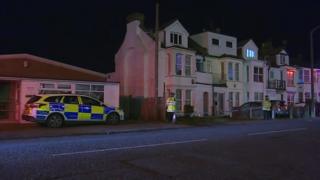 Police outside the property in Clacton

A man has been charged with murder after a woman’s body was found in Clacton.

Scott Hilling, 25, of no fixed abode, has been remanded in custody and is due before Colchester Magistrates’ Court on Monday.

Essex Police were called to a house in Old Street at 10:50 GMT on Friday and found the dead woman, who was believed to be in her late 50s.

A post-mortem test is due to be carried out.