Man dies in ship 'explosion' in Port of Felixstowe 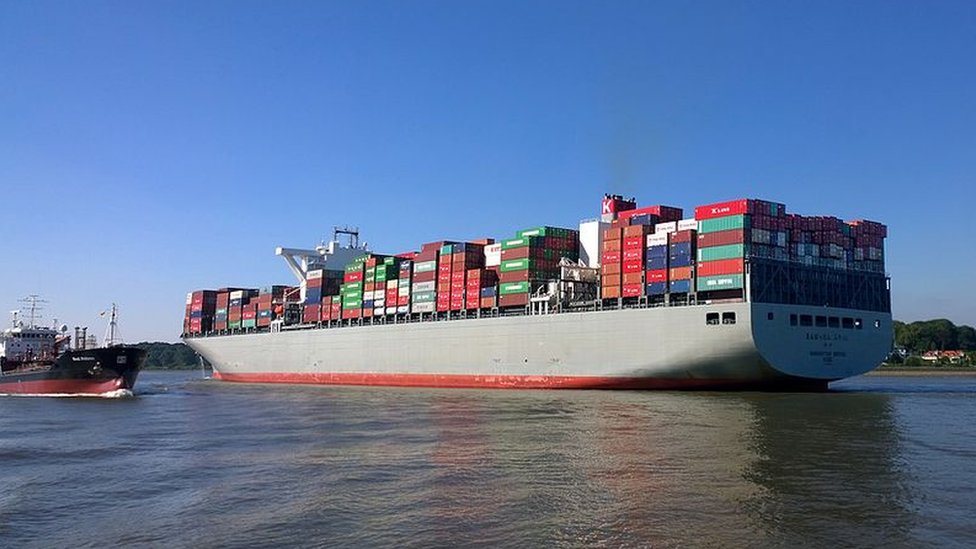 A person has died in what has been described as an “explosion” on board a ship at the Port of Felixstowe.

One person was killed and another taken to hospital after the apparent blast in the Manhattan Bridge’s boiler room.

The Japanese ship was docking at the Trinity Terminal just before midnight. Suffolk Police said the death was not being treated as suspicious.

People who live nearby described hearing a loud explosion unlike anything they had heard before.

There will be a joint investigation between the police and the Maritime and Coastguard Agency.

On the port’s website, the Manhattan Bridge is reported as being run by “K” Line, had last docked at Rotterdam and was due to head to Hamburg.

It is thought to have arrived in Felixstowe at 23:12 GMT on Thursday.

Felixstowe is home to Britain’s biggest and busiest container port, and is the 37th busiest port in the world, according to the World Shipping Council
It is visited by about 3,000 ships each year
Around 30 shipping lines operate from the port
The port is run by the Felixstowe Dock and Railway Company, which was set up in 1875, and in 2011 celebrated the 125th anniversary of the first commercial vessel working at the port

A port spokesman said the incident took place when the ship was not alongside the port, so the incident did not fall under the port’s jurisdiction.

Suffolk Police is leading the investigation and remain at the scene.

The port has not yet said if it will launch its own investigation.

Baz O’Connell lives in Shotley, opposite the Port of Felixstowe, and works at the marina there.

“There was just a very loud bang. You hear noises all the time where they drop containers but this was a much louder noise than normal,” he said.

“I live in a caravan opposite the docks so it woke me up.”

Gary Richens, who also lives nearby, said he also heard the explosion.

“I’d been at a parish council meeting, and was watching TV when I got back when I heard a really different low boom,” he said.

“I looked over at the port of Harwich, as that’s the time when the Stena Line service leaves, but everything looked in order.

“It was a very definite low boom that was different to any other noise I’d heard.”

Qantas to fly from London to Australia non-stop