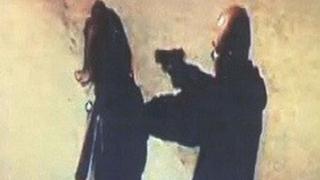 From the section Wiltshire

A man who pointed a gun at a woman’s head during an argument in the street has been jailed for 14 months.

Stephen Heffernan was captured on CCTV aiming the carbon dioxide air pistol at his victim in Brick Lane, Trowbridge, Wiltshire, in March.

The 44-year-old, from Bradford on Avon, admitted possessing a weapon with intent to cause fear of violence and was sentenced at Swindon Crown Court.

Bedford foodbank funds frozen 'because of US law'

'Death Row' dog Stella is freed and gets...