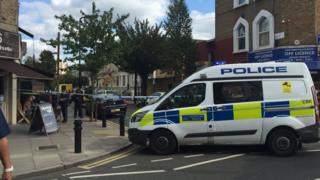 A man has been shot dead in a street in east London, the Metropolitan Police have said.

Specialist firearms officers were called to reports of shots being fired on Chatsworth Road in Lower Clapton at about 13:00 BST.

They found a man who had suffered gunshot injuries and he was pronounced dead at the scene.

No arrests have been made and a post-mortem examination will take place in due course.

The victim’s next of kin have not been informed.

Football fans give shirts to homeless