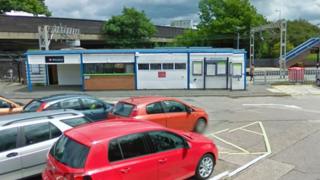 The man was attacked after leaving the train at Winsford

A man was stabbed in a station car park after challenging a group throwing objects around a train carriage.

The 28-year-old victim, from Liverpool, required surgery for his injuries following Thursday’s attack.

He was travelling on the 20.34 GMT service from Liverpool Lime Street to Birmingham New Street when he challenged the group.

He was attacked after leaving the train at Winsford station, Cheshire, at around 21.10 GMT.

Det Sgt Matt Davies of British Transport Police said: “Thankfully the victim’s injuries are not life-threatening, but he remains in …read more