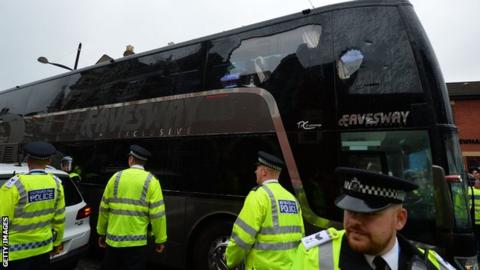 Ugly scenes marred West Ham’s last game at Upton Park as Manchester United’s coach was attacked on the way into the ground, delaying kick-off by 45 minutes.

Bottles were thrown and smashed the coach’s glass as police escorted the visitors into the stadium.

“It wasn’t nice, the coach got smashed up” said visiting captain Wayne Rooney.

He told Sky Sports: “I’m sure West Ham as a club will be disappointed with what the fans have done.”

West Ham move to the Olympic Stadium for the start of next season after 112 years at Upton Park, also known as the Boleyn Ground.

“It has an influence on the players – not just Manchester United, but also West Ham. I think it will be very aggressive because the fans were emotional. They will influence the game, I think.”

West Ham co-Chairman David Sullivan played down the incident, telling BBC Radio 5 live that their opponents should have arrived earlier.

He said: “It is depressing really, it will be a late night for our fans and some of them won’t be able to stay.

“I don’t understand why United couldn’t get here at 4pm. They could have got here early. They knew it would be busy. It’s crazy.

“There was congestion in the street and they couldn’t get the coach in. There were people around the coach, but there was no attack on the coach.

“If you check the coach there won’t be any damage to it. If we arrived late at Old Trafford they wouldn’t put the kick-off back.”

A Metropolitan Police spokesman said an “appropriate policing plan is in place”, adding: “We are aware that a number of items were thrown towards Manchester United’s coach.

“One police officer and a member of the public sustained minor injuries. There have been no arrests.”

Older drivers are 'not dangerous'