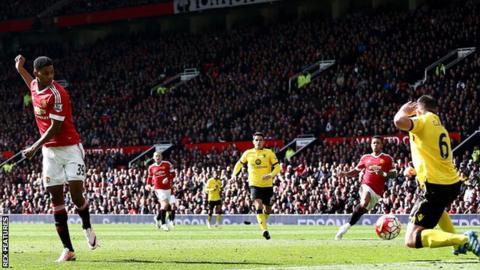 Aston Villa have been relegated to English football’s second tier for the first time since 1987 after defeat at Manchester United.

Villa were second best for much of the game, though they did hit a post late on through Rudy Gestede’s volley.

It was a ninth straight loss for the visitors and left them 15 points from safety with only four matches left.

Relive the action from Old Trafford

Does ‘anarchy’ beckon for Villa?

European Cup winners in 1982, Aston Villa have a proud history but are facing a turbulent immediate future.

Caretaker manager Eric Black has spoken of the danger of the club falling into “anarchy” at the end of a miserable campaign played out against the backdrop of fan protests against Randy Lerner’s ownership.

Last time Villa were last relegated to the old second division they immediately returned under Graham Taylor and finished second in the top flight the following season.

At Old Trafford they were outplayed for the majority of the game until the introduction of Gestede gave the travelling supporters hope of salvaging something from the day they finally went down.