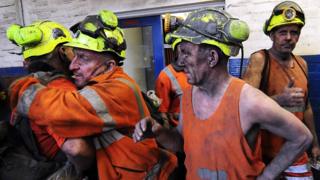 From the section York & North Yorkshire

Many Kellingley Colliery workers clocked off at 12:45 GMT on Friday

A march will take place later to mark the closure of Kellingley Colliery in North Yorkshire, and with it the end of British deep coal mining.

The march, organised by the GMB union, will start at Knottingley town hall in West Yorkshire at 12:30 GMT.

It finishes with a rally a mile and a half away at Kellingley Miners Welfare.

Miners finished their final shifts at the pit on Friday, bringing to an end centuries of deep coal …read more