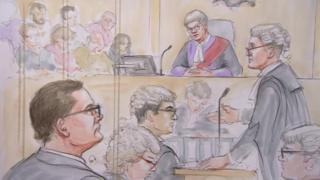 Jason Lawrance (left) is on trial at Derby Crown Court

A man attempted to rape a woman he met through Match.com then contacted her saying “Boo! xx” 24 hours later, a court has heard.

Jason Lawrance is accused of raping five women he met on the dating website, attempting to rape a sixth woman and sexually assaulting another.

He is alleged to have assaulted victims from five counties between June 2011 and November 2014.

The 50-year-old, of Liphook, Hampshire, denies the charges.