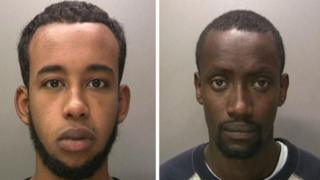 Two men who repeatedly stabbed a man at a family barbeque have been jailed.

Juma Munyankore, 25, and Hamza Mohumed, 24, carried out a “vicious, outrageous attack” which was seen by a child in a Coventry garden last September.

Doctors' dispute 'could become a war'

Amputee to be father after septicaemia ordeal