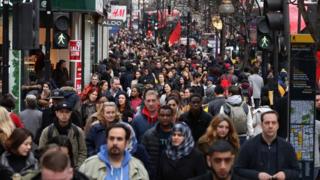 Millions of shoppers have hit the Boxing Day sales on high streets across the UK, seeking out the best bargains.

The keenest queued from the early hours, with some stores opening their doors from 06:00 GMT.

Retailers including Harrods, Liberty, House of Fraser, Next and Marks & Spencer dropped their prices in store, and offered more discounts online.

Selfridges reported its best-ever first hour of trade, taking more than £2m between 09:00 GMT and 10:00 GMT.

Online shoppers were expected to spend £856m on Boxing Day – up 22% from last year’s £699m – according to data firm Experian and online retailing trade association IMRG.