TV star Miranda Hart has announced there will be no more episodes of her hit BBC sitcom after this Christmas.

“I’m actually coming to the end of the whole sitcom,” she revealed on Steve Wright’s BBC Radio 2 show on Thursday.

“I’m doing two Christmas specials, but they are going to be the finale of the show, full stop,” she continued.

The 41-year-old actress and comedienne said it was “the right time to end it” and wanted the programme to go out “on a high”.

She said the filming of the last two episodes in November would be “really emotional” and she would miss making the programme.

Miranda, which first aired on BBC Two before moving to BBC One, cast its creator as a joke shop owner prone to committing social faux pas.

The programme also featured Patricia Hodge as her TV alter-ego’s mother and Sarah Hadland as her shop’s assistant manager. 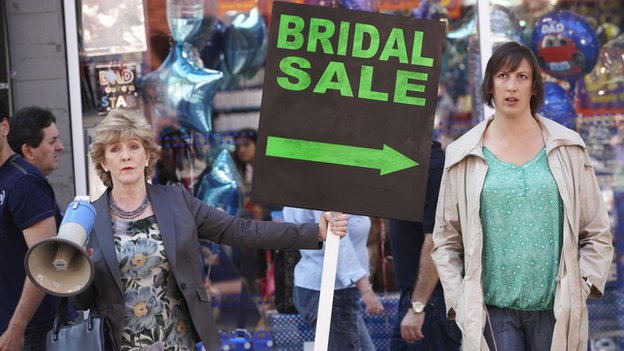 The sitcom drew huge audiences with its slapstick humour and plots revolving around her character’s disastrous love life.

Yet Hart told Wright she wanted the character to “come into her own” and “be happy in herself”.

“People have loved the character, which is so nice and amazing for me,” she told the afternoon DJ.

“But as she gets older I don’t want her to keep falling over and make a complete fool of herself.”

Hart also addressed speculation she is to launch a revival of classic BBC game show The Generation Game.