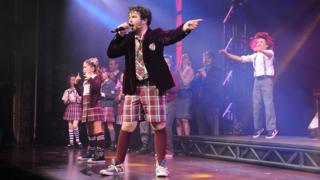 The show, which was a hit 2003 film starring Jack Black, is about a wannabe rock star who poses as a teacher, forming a band with his students to enter a music contest.

The Guardian said the musical had “lost its mojo” and was “innocuous”.

The Hollywood Reporter, however, described it as a “crowd-pleaser”.

Clarkson hopes to 'appear on BBC all the...