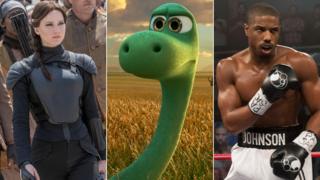 L to R: Jennifer Lawrence in The Hunger Games: Mockingjay – Part 2, Arlo, star of The Good Dinosaur and Michael B Jordan in Creed

The final film in the Hunger Games series has held onto the top spot at the US and Canada box office, despite competition from Pixar’s new release.

The Good Dinosaur, in contrast, could only muster $39.2m (£26m) from its first five days on release.

Creed, a continuation of …read more

Sofia Vergara speaks out on embryos