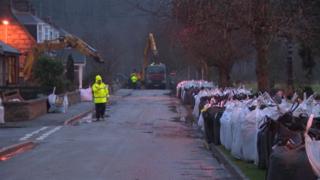 Sandbags have been put out in Ballater ready for expected floods

More flooding is expected in parts of Scotland as the country continues to clean up after Storm Frank.

The Met Office has issued amber “be prepared” warnings of rain for much of north east and central Scotland on Saturday and Sunday.

The areas were among the worst affected by Storm Frank on Wednesday.

The amber alert covers Grampian, Tayside, central Scotland and Fife from noon on Saturday until 15:00 on Monday.

Sepa said flooding was expected later on Saturday and on Sunday.