MPs' 'knickers in a twist' over beer tap 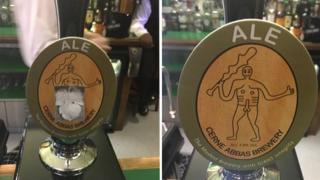 From the section Dorset

A brewery’s logo has been censored in a Houses of Parliament bar because it was deemed too shocking.

Cerne Abbas Brewery Ale is on sale in Westminster but the pump clip, featuring the “particularly well-endowed” Cerne Abbas chalk giant, has been covered with a paper fig leaf.

Head brewer Vic Irvine said no-one had taken offence to the logo before.

Michael Gove: Theresa May was 'right to sack...