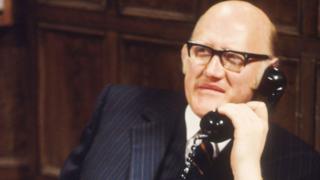 Are You Being Served? actor Nicholas Smith dies aged 81

Nicholas Smith as Mr Rumbold in Are You Being Served?

Nicholas Smith, the actor who played the jug-eared manager Mr Rumbold in the BBC sitcom Are You Being Served?, has died aged 81.

“It is with great sadness we can confirm that our client, the actor Nicholas Smith, passed away yesterday,” said his agent Rebecca Kirby.

“He was a lovely man and a terrific actor. He will be much missed by all who knew him. Our thoughts are with his family.”

Smith died in hospital on Sunday.

The actor is the last of the original cast of the sitcom to die.

Set in a department store, Are You Being Served? ran from 1972 to 1985 and often attracted audiences of more than …read more