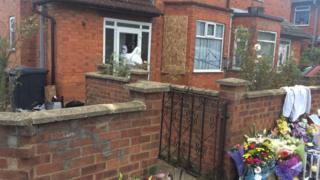 From the section Northampton

David Brickwood was attacked in the early hours of Saturday morning at his home, which is being examined by forensic investigators

A man has died after what police described as a “violent and dreadful” attack in his Northampton home.

The death of David Brickwood, 74, is being treated as murder, following the assault at the house in Lindsay Avenue in the Abington area of the town.

A major incident room has been set up to investigate Mr Brickwood’s murder.