Pink Floyd guitarist and singer David Gilmour has said he is “pretty certain” the band’s latest album will be their final LP.

Speaking to BBC 6 Music’s Matt Everitt, he said: “This is the last thing that’ll be out from us.”

The record, The Endless River, is a tribute to Pink Floyd’s keyboard player Rick Wright, who died in 2008.

Gilmour said Wright was “underestimated by the public, by the media and by us at times I hate to say”.

The album will be released in November and will included material recorded by Wright before his death at the age of 65.

Gilmour said: “I didn’t necessarily always give him his proper due. People have very different attitudes to the way they work and we can become very judgemental and think someone is not quite pulling his weight enough, without realising that their’s is a different weight to pull.” 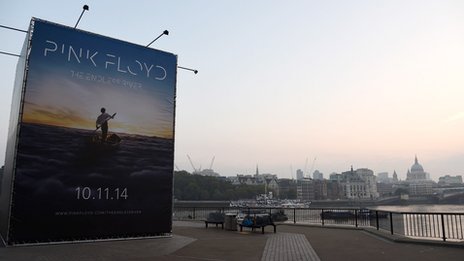 The album artwork was unveiled in London

Bandmate, drummer Nick Mason added: “It is a great opportunity to recognise, remember and maybe give some credit rather late on.”

Gilmour joined the band in 1967 and Barrett, who suffered from mental health problems left a year later.

Their albums, which include The Dark Side of the Moon, The Wall and Wish You Were Here are listed among the most influential rock albums of the 20th Century.

Seven bands from the 80s we wish would...