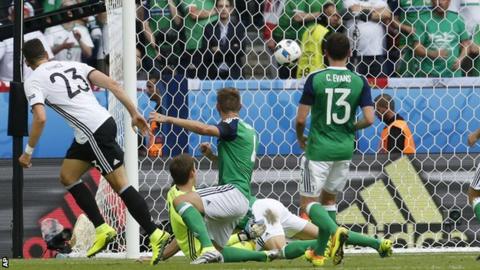 Northern Ireland must wait to see if they have reached the last 16 of Euro 2016 after defeat by Germany in Paris.

Thomas Muller hit the post and bar but it was his touch that allowed Mario Gomez to smash home from 10 yards.

Mario Gotze drew a fine save after the break but the narrow loss aids Northern Ireland’s goal difference so they may yet finish as a best third-placed team.

They will go through on Tuesday if the Czech Republic do not beat Turkey, but if that result goes against them there is still hope Wednesday’s results could fall in their favour.

Slovakia – who finished third in England’s group – are now guaranteed a last-16 place with the four points they picked up in Group B.

Kyle Lafferty (Northern Ireland) wins a free kick in the defensive half.

Attempt missed. Mesut Özil (Germany) right footed shot from the right side of the box is close, but misses to the right. Assisted by Thomas Müller with a headed pass.

Attempt saved. Mario Gomez (Germany) left footed shot from outside the box is saved in the centre of the goal. Assisted by Thomas Müller.