The weekend takings for Nightcrawler, which stars Jake Gyllenhaal as an ambulance-chasing freelance cameraman, were ahead by just just $8,700 (£5,400) according to studio estimates.

However the two films could swap places once the final takings are confirmed.

Ouija is based on the board game used by some to try and contact the dead.

The low-budget supernatural horror was last week’s number one and is games company Hasbro’s first venture into the film industry. 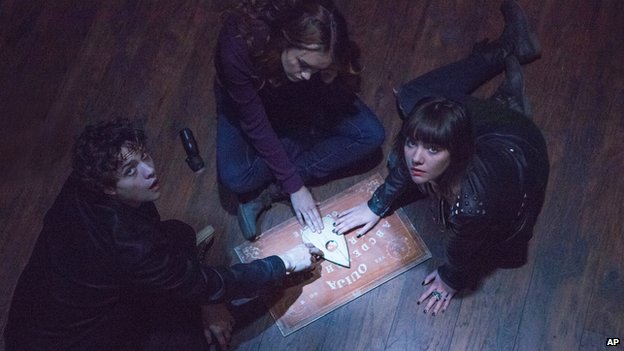 Director David Fincher’s take on Gillian Flynn’s best-selling book took $8.8m (£5.5m) over the weekend, while animated adventure The Book of Life was in fifth place with $8.3m (£5.2).

With Halloween a big celebration in the US and Canada, analysts said box office earnings suffered from people out celebrating and trick or treating.

“The scariest thing about this weekend was that Halloween fell on a Friday,” said Paul Dergarabedian of box office tracker Rentrak.

He said it “hit the box-office fairly hard, with the day down around 40% from Friday a year ago”.

Inside Out wins big at Annie Awards

Singer of the World winner crowned