Robin Williams was not under the influence of drugs or alcohol at the time of his suicide, authorities in California have revealed.

The actor, 63, was found dead in his California home on 11 August in what authorities soon ruled a suicide.

A Marin County coroner’s report released on Friday found Williams died from asphyxia due to hanging.

Williams, famed for roles in such films as Mrs Doubtfire and Good Will Hunting, had been treated for depression.

The entertainer was last seen alive by his wife on 10 August, and was found dead the following day.

On the morning he was found, the actor’s personal assistant became concerned when he did not respond to knocks on the door, authorities say. The assistant entered the room and found Williams dead.

Williams won an Academy Award for his role in Good Will Hunting and starred in films including Good Morning Vietnam and Jumanji. 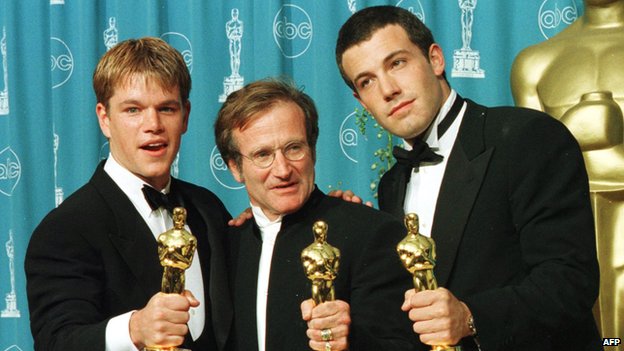 Williams with his Oscar, flanked by co-stars Matt Damon and Ben Affleck

In the past Williams had talked, and even joked, about his struggles with alcohol and drugs. After his death, his representative said he had also been “battling severe depression”.

He had earlier returned to a rehabilitation centre to “fine-tune” his sobriety, the Los Angeles Times reported in July.

In a statement following his death, Williams’ wife Susan Schneider said she was “utterly heartbroken” and asked for privacy for the family.

“As he is remembered, it is our hope the focus will not be on Robin’s death, but on the countless moments of joy and laughter he gave to millions,” she said.