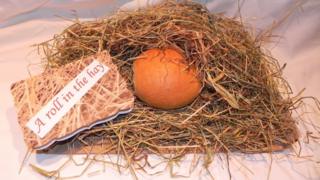 Imogen Crees submitted “A Roll in the Hay”

The winner of an art prize which rewards competitors for taking “the least amount of effort possible” is to be crowned later.

A bread roll nestled in hay and a galvanized staple on a paper plate are two of the entries shortlisted for this year’s Turnip Prize.

A turnip nailed to a block of wood is given to the winner.

Whale stranded on Perranporth beach dies on the...