'No nostalgia' for Ford in Star Wars 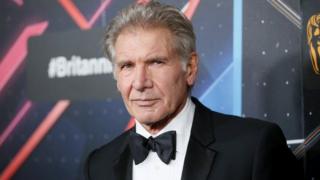 Star Wars actor Harrison Ford has said he felt no nostalgia when he returned to the role of Han Solo for the first time in more than 30 years.

Ford joins other original cast members Mark Hamill and Carrie Fisher in Star Wars: The Force Awakens, which is released later this month.

Ford said the film will show how “the relationships between him and other characters have developed off-screen”.