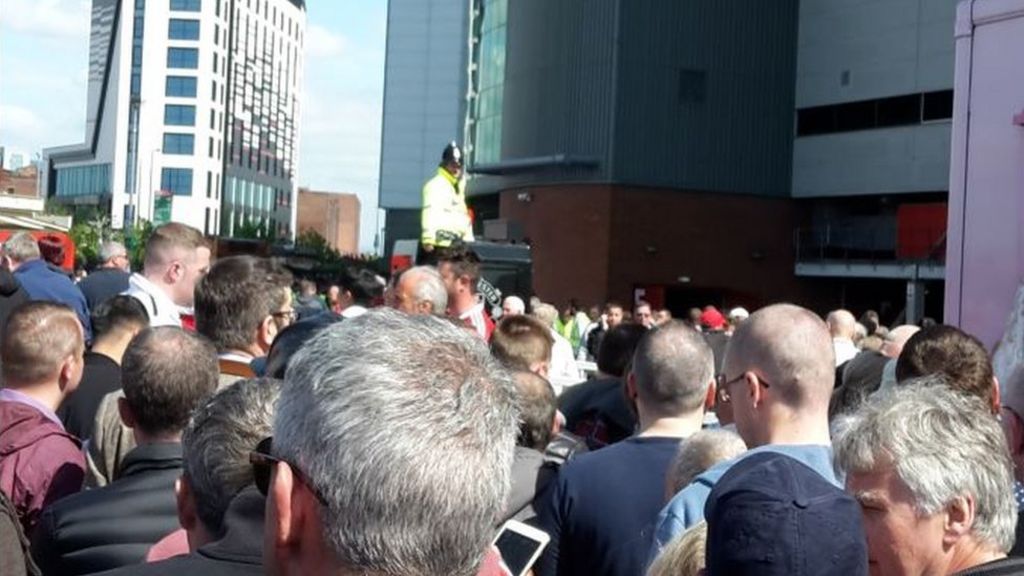 Fans have talked of their disappointment after Man United’s final match of the season was called off when a suspect package was found.

Two stands at Old Trafford were evacuated, before bomb disposal experts carried out a controlled explosion.

Some supporters travelled from as far afield as Azerbaijan and Sierra Leone for the match against Bournemouth.

The police response was praised by some while others criticised how the evacuation was dealt with.

Johnny Escott, from Salford, had just got into the Stretford end of the stadium when the evacuation was announced over the tannoy.

“Everyone just looked at each other like ‘Was that a mistake?’,” he said. “It was a bit scary but no-one really started to panic massively, I walked past a few kids who were crying but everyone seemed quite calm”.

Mr Escott said he found out information from Twitter as he “got told nothing at the stadium” but said the stewards “probably did as much as they could”.

July Holmes, from Hyde, said she “didn’t get a great deal of information” when she was stopped from entering the ground and relied on people at home telling her what was going on.

But she said the fans “were amazing, they were really calm and there was no rushing or pushing. It was controlled well.”

Andrea Skelly, 47, from Bury, was on her way into the ground when the announcement was made and was unhappy with the way police dealt with incident.

She said only one police officer was directing the crowd and was telling people to move back towards the car park but that it was blocked by burger vans and the mass of people.

“The problem was that you couldn’t get out… apparently the gate was blocked and we were stuck for about 20 minutes,” she said.