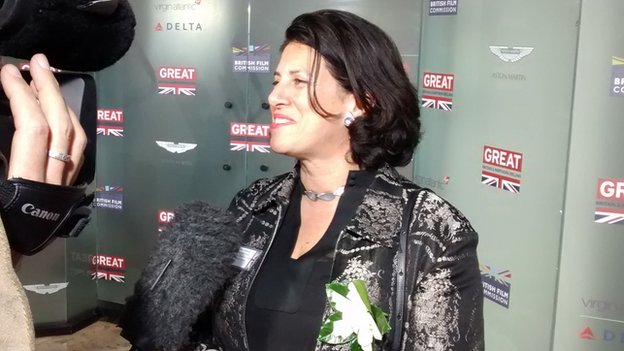 British Oscar hopeful Anna Pinnock has been given time off from new James Bond film Spectre to attend Sunday’s Academy Awards – where she is nominated twice.

This year British films and talent earned 39 nominations across 19 categories at the Oscars.

Pinnock is up against herself in the production design category for Into the Woods and The Grand Budapest Hotel.

“They’ve given me three days off,” she told the BBC at a reception in Los Angeles for British Oscar nominees.

“We’re not even half-way through yet. We’ve just been in Italy, in Rome, then we’re back at Pinewood and then it’s Mexico.”

Most were behind-the-camera talent from categories such as cinematography, costume design, film editing, music, sound mixing and visual effects.

Pinnock, who grew up in Canterbury, won a Bafta for her production design on The Grand Budapest Hotel two weeks ago.

Her Oscar nominations this year are her fourth and fifth in a 30-year career. Her previous nods were for her work on Gosford Park, The Golden Compass and Life of Pi.

Talking about working on Wes Anderson’s quirky comedy The Grand Budapest Hotel, she said: “It appeals on every level, it’s definitely his best film.”

The film has nine nominations at the Oscars with Pinnock tipped to win her category.

T in the Park to begin at Strathallan

Rowling thanks supporters after abuse