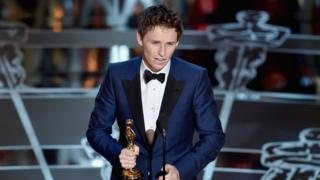 Eddie Redmayne is tipped to be in the running for a second best actor award when the Oscar nominations are announced later.

He is expected to be cited for his role in The Danish Girl, with competition set to come from Leonardo DiCaprio.

DiCaprio, the star of survival epic The Revenant, has been nominated four times but is yet to win an Academy Award.

Cumberbatch up for WhatsOnStage award