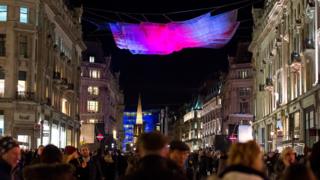 Lumiere London Festival: Installations switched off due to crowds

Installations were temporarily switched off and Kings Cross Station was evacuated due to overcrowding at the Lumiere London Festival on Saturday.

Visitors to the free event have been told to check social media before visiting on Sunday evening.

The organiser, Artichoke, and the Met Police sent tweets on Saturday asking people to come on Sunday instead.

It is the first time the festival of lights, featuring installations …read more