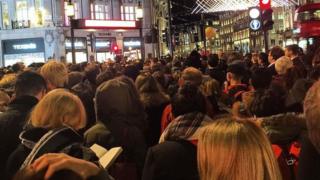 Oxford Circus Tube station was temporarily closed 113 times in the space of a year because of overcrowding, new figures have shown.

The shutters were brought down on entrances a further 15 times for other reasons, including staffing issues and strikes, in the 12 months to October.

Other major Tube stations Victoria and Waterloo closed five times and once respectively.

Transport for London said it recognised Oxford Circus could get “very busy”.

Medal for man with diabetes for 80 years