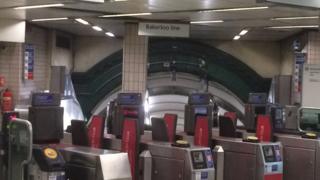 Passengers in London have been travelling for free after a technical glitch left people unable to use their Oyster cards.

A system fault with the card readers has affected buses and Tube stations, with passengers being waved through by Transport for London (TfL) staff.

A TfL spokesperson said it was working to resolve the issue “as quickly as possible”.

People could still travel across the Tube, bus and rail networks, it added.

Hundreds ill due to 'norovirus outbreak at restaurant...