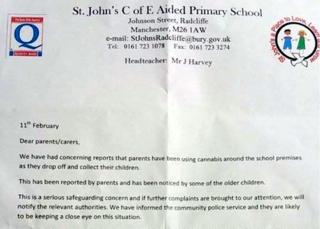 Some parents have been seen “using cannabis” while dropping off and collecting their children from a primary school, it has been revealed.

St John’s CofE Primary School in Radcliffe, Greater Manchester, issued a letter after parents reported the class B drug “being used” around the site.

The letter said it had been “noticed” by some older children, adding it is a “serious safeguarding concern”.

Police use of force 'must be recorded'