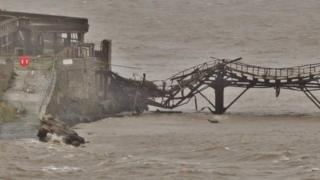 Part of a historic pier – the only one in Britain to lead to an island – has collapsed into the sea.

A walkway at Birnbeck Pier, in Weston-super-Mare, collapsed into the Bristol Channel, the Birnbeck Regeneration Trust said.

The structure is among the 10 most endangered buildings on a list compiled by The Victorian Society.

The Grade II*-listed pier shut in 1994 and has since fallen into a state of disrepair.

London's unused water cannon to be sold by...